One thing that I haven't had a really good look at, coming from a non-pentesting background, is how to avoid anti-virus scanners; so here is my first serious dive into it.

I suspect to most this isn't anything new to experienced testers. Given the limitations of even “smart” anti-virus products, this type of issue is expected and will not be limited to any one AV vendor.

Nevertheless, I was curious to find out how easy it is to out-smart an intelligent scanner in order to get known malware past the scanner. Short answer; surprisingly easy.

The setup is a Windows Vista and Windows 8.1 VM running Kaspersky Anti-Virus 2017 with updates applied. The scanner was set to High (max protection), Heuristic Analysis set to Deep scan, and the iSwift and iChecker Technology enabled.

The malware is the venerable ncx99.exe. Others have tried xor encoders and many other variants to bypass the scanner, without success. So I thought I would take a different approach to find something missing from the emulator used to get malware to unpack and expose itself; finding that glitch in the Matrix.

I won't cover basic XOR encoders here; Google is your friend if you wish to know.

Upon starting ncx99.exe in a debugger we notice the following at the program entry point:

It turns out that the delta between ESP and EBP is always the same (at least on my Vista VM; a little more on that later).

So let’s reference the XOR encoder and base address indirectly based on the designed functionality of the stack rather than computing it in the program. This way the emulator needs to already be aware of this relationship; so is it? (I suspect you already know the answer!)

First, I modify the PE Header in the file to point to a new code cave:

Back in the debugger I then create the following stub and save a new copy of the executable with these changes:

Passing through the AV shows no issues. Running it creates a listener on 99/tcp which we can connect to in order to get full system access. Success.

Next, I thought I would test the ability of the AV to figure out known offsets. So rather than the non-explicit connection between ESP and EBP, lets rewrite it to see if the emulator is stack-aware.

I change the EBP offsets to the following; correcting the stub offsets accordingly:

This time the AV detects that it is ncx99; so it looks like the emulator in the AV is stack aware. 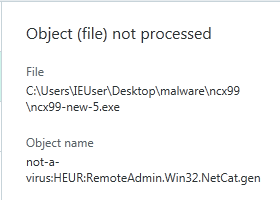 Finally, I decided to test the approach on Windows 8.1. In this case the stack is a bit different on entry, but the delta is still consistent across reboots.

A simple adjustment to the relative offsets from EBP yields success:

i.e. a functional malware that is known to the AV product but not detected by it.

This code can probably be simplified (some null actions, etc, from previous tweaks) and made version agnostic; but I will leave that as an exercise for the reader as this was only meant to be a PoC.

I also tried this technique (but using some spare space at the end of the .text section) on some other programs including netpass.exe and all became undetectable by the AV file scanner. Yey.

The take for me is that signature based detection is good for low-hanging fruit; stuff that is already known or similar. However, once you start customising stuff it can rapidly lose its effectiveness. Sometimes that customisation may only need to be a simple tweak, as in this example.

Update: Uploaded to virustotal and now detection is slowly growing; though a few major vendors including Kaspersky still don't detect it. You can see the sample here
Posted by m0noc at 15:29

About me and this Blog